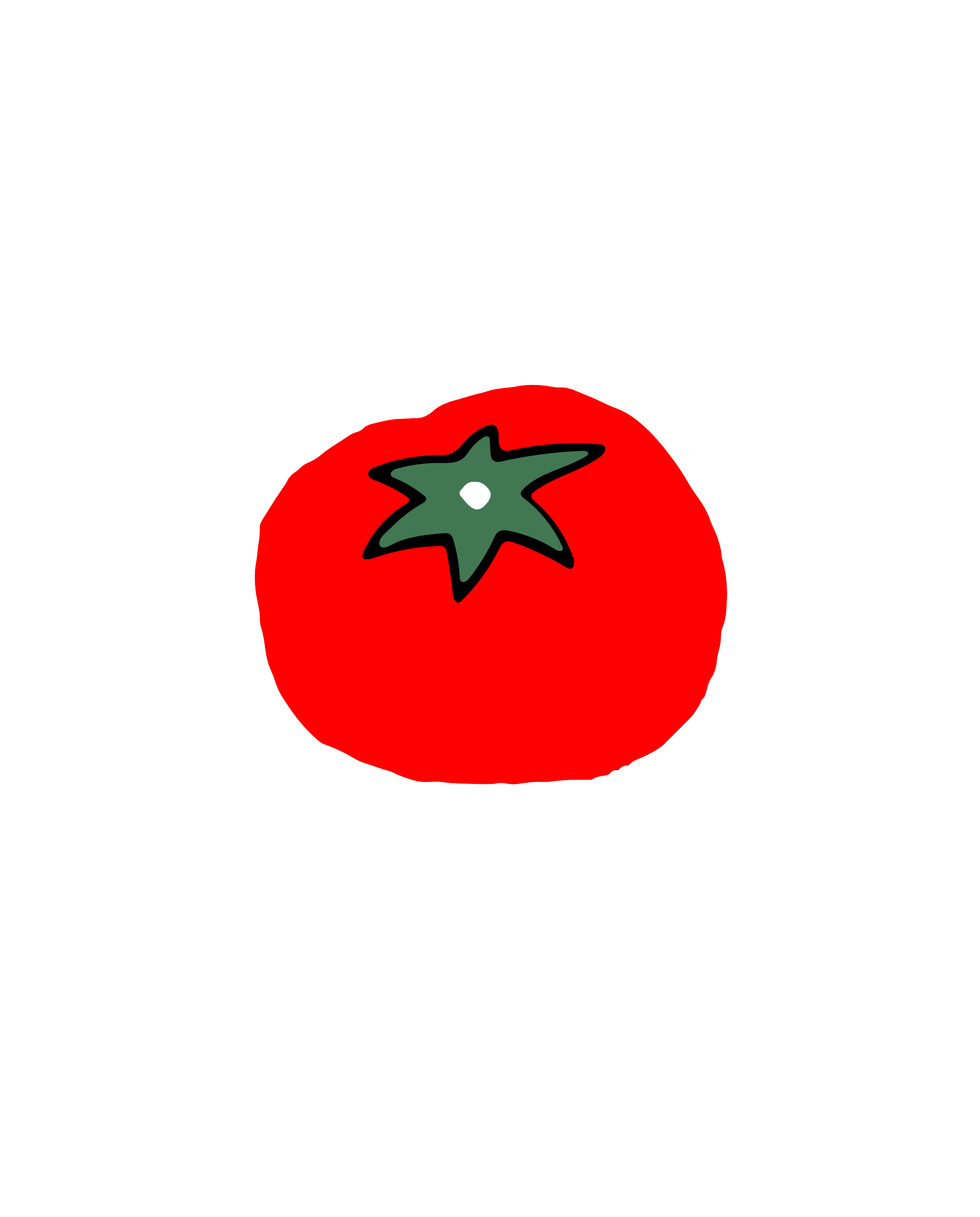 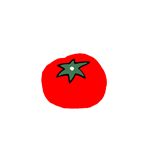 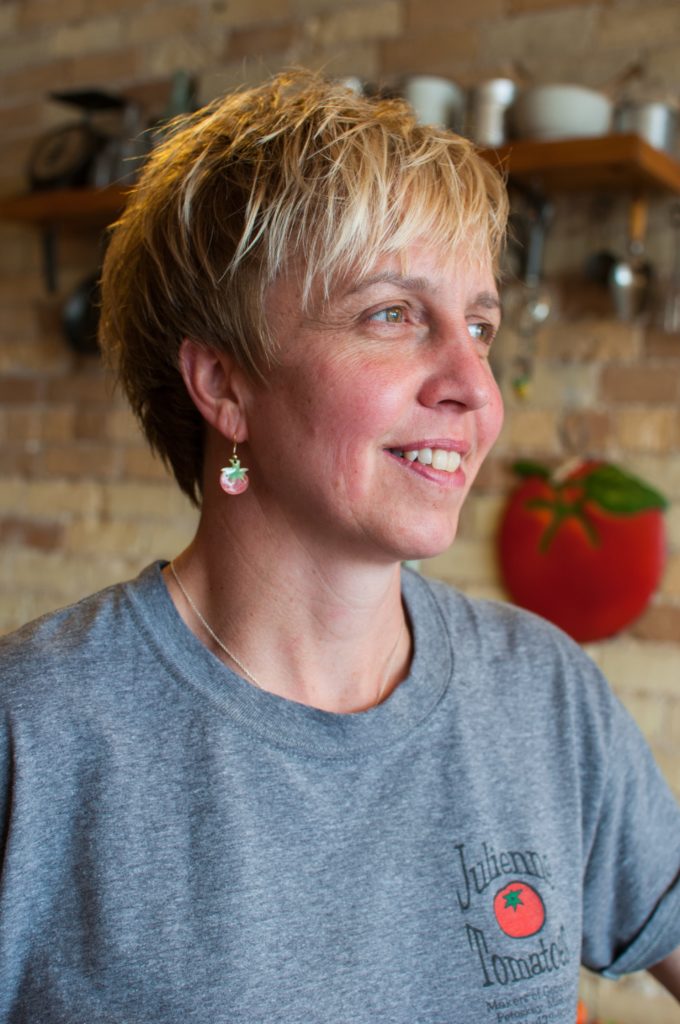 Julie Adams – Owner of Julienne Tomatoes can be seen often behind the counter taking your order, organizing catering orders, and bustling around the kitchen.

Known for greeting customers with a smile, and often remembering your favorite order.

WE ARE PROUD TO SUPPORT MANY ORGANIZATIONS WITHIN THE PETOSKEY AREA.

We are fortunate to conduct business in a tremendous community. One that is generous, friendly, beautiful and supportive. It only makes sense to do our part. “It is better to give than to receive”, is an understatement. We see the benefits of giving everyday, and it feels good.

The History of 421 Howard St

There is an “Andrew Lindell” listed as a “Cabinet Maker” for Petoskey, MI (no address given) in the 1884 publication of THE TRAVERSE REGION, Historical and Descriptive, with Illustrations of Scenery and Portraits and Biographical Sketches of Some of its Prominant(sic) Men and Pioneers

On November 20, 1897 Samuel S. Schilling purchased the building from the Lindell’s, of Petoskey, for $1400.00.  At the time, Samuel S. Shilling was married to Alice, whom he married on 25 December 1881.  They resided on Fulton Street between Howard and Petoskey streets.  Mr. Schilling was listed as a wagon maker in the 1882 Petoskey City Directory.

Could maybe be Schillings Feed Store

As insurance maps would indicate, a small, one story wood frame building existed on the property when purchased.  It can only be assumed that new construction on the property would have started in spring of 1898.  According to the news item in The Independent Democrat dated 22 March 1901, the building had been in use for about a year.

It is believed they were a wholesale seller of meats.  Note the Schillings still owned the building.

There are numerous historical mentions around 1900 of a “City Bottle Works of Iron Mountain MI. It stands to reason that they may have had a remote bottling location in Petoskey to serve those in lower Michigan. Responsible for the Famous Petoskey Constitutional Restorative Water.

According to the Petoskey City Directory of 1903, Hamill’s Meat Market was previously located at 425 Howard Street.  It appears they took occupancy at 421 Howard Street in 1911.  The business seems to have operated until at least 1921.  In The Petoskey Evening News 24 October 1927 Herbert Hamills death notice was published.  It describes him having closed his business “about 6 years ago”, consistent with the Petoskey City Directory listing Hamill’s Meat Market as occupants of 421 Howard Street in the 1921 & 1922 edition

They offered a nice selection of both packaged & bulk, natural and organic foods, herbs, vitamins and supplements. The Grain Train Co-op is now located up the road at 220 E. Mitchell Street.

Since 2003,  Julie has been serving the finest food in Northern Michigan.  Locals and visitors agree, Julie’s housemade soups and handcrafted sandwiches are a wonderful addition to the downtown Petoskey landscape.  They look forward to seeing you on your next trip through town.

Petoskey Regional Chamber of Commerce
The Petoskey Regional Chamber of Commerce and its abundant programs that promote entrepreneurism, tourism, networking, and advocacy for area businesses. There are more than 750-members of the Chamber.
CharityAuctioneer.com
Working exclusively with non-profits of all sizes for over 20 years, this is the Official Charity Auctioneer for Julienne Tomatoes.
Little Traverse Bay Humane Society
The Little Traverse Bay Humane Society is a non-profit organization promoting awareness and compassion toward all living things.
Taste The Local Difference – Michigan Land Use Institute
Promotes local farm foods, helps schools serve them, links new farmers to land, and other resources and supports food and farm business networks.
Pond Hill Farm
Family owned and operated farm located 5 miles north of downtown Harbor Springs, Michigan on scenic M119.

We are proud to participate in the Emmet County Recycling program. They help to keep our community beautiful. 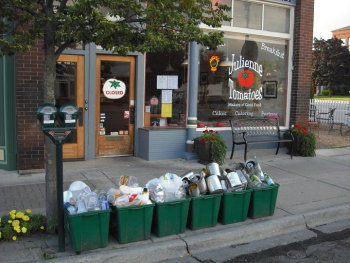 Get Social With Us!

Julienne Tomatoes Deli & Bakery
4.7
Based on 173 reviews
powered by Facebook

Cphe Nyambose
2023-01-16T01:30:10+0000
I am so grateful Mrs Kelly Robert, you have made my dreams come true, after trying to invest with so many expert... traders which yielded no profit and negative, I finally met Mrs Kelly Robert, through someone she had worked for, I invested $1200 unbelievably I got $14,750 after 7 working days of trading, I earned so good profit . Contact Mrs Kelly Robert directly on this to invest and earn good profit, if interested.Email: kellyrobert11009@gmail.comWhatsApp:+1 (323) 628-7351This is 2022 don't allow anything to hold you down, start investing and have all cost to testify.read more

Skhosana Siyabonga Happy
2023-01-15T22:02:48+0000
Invest with a well known person and platform, where you will have to create and fund your trading account, have full... access to be monitoring your trading account, how your profit goes, and at the end of every successful trading, you can place your withdrawal request to your bank account or bitcoin wallet with no stress. And that was what I achieved from Mrs Kelly who helped me to trade my $1000 into $11,000 weeklypossible link to contact her when it comes to forex/bitcoin trade via:WhatsApp: +1(323) 628-7351Email: Kellyrobert11009@gmail.comread more

Clark Andrews
2022-07-12T18:53:41+0000
My wife and I were visiting Petoskey and wanted to grab a quick lunch. We split a delicious grilled Ham and Brie... sandwich and a wonderful bowl of Gaspacho soup. The staff was friendly and even cut the large sandwich into 2 halves for each of us. I highly recommend it!read more

Julienne Tomatoes
4.5
Based on 119 Reviews